The guys at Napoleón at War when publishing their rules decided on a unique dimensions for their base sizes. This may be no problem for players who are new to the period, but it means many players who already have their Napoleonic armies based, will not even attempt to play the game, due to not wanting to rebase their figures even if they like how the game works.

Due to this being a major stumbling block for attracting new players here is my solution:

The main comercial rules competition for this level of playing, where we are presenting individual battalions, regiments and batteries that I have come across is Lasalle and FOG N, these rules use the same basic basing system and so most people I know, have hundreds or even thousands of figures based for these rule systems.

If both players are using armies based for Lasalle or FOG N there is no problem, just go to the section below about how to deal with casualties etc.

Also remember in Napoleonic wars no two units were ever the same size and so if its just a friendly and with the agreement of both players they could play using different base systems. Just visit the section below about how to deal with casualties

If a NAW based army player is playing against a player based for Lasalle or FOG N follow the procedure below to play an equal game in a competitive enviroment.

In NAW Infantry units are comprised of 6 bases 26mm wide and 32mm deep.

The footprints of each full strength formation are as follows

As you can see by the photo and the dimensions above, the actual size of the formations are basically the same with only a few milimeters  difference. The only formation that is different is March column formation with the NAW column being deeper.

In my experience the march column is used less frequently in NAW than Lasalle due to the formation moving the same rate as an attack column unless on road and armies initially deploying further up the table, than in Lasalle. Therefore my solution to represent a March Column with Lasalle bases would be place them in line (usually they would be on a road) but alternate the facing of the bases to represent that they are in march column and not actually in line see illustration below. This gives the march column of 30mm wide and 156mm depth, still 36mm short in depth but I feel not enough to make a great difference.

If the unit has at least one skirmish base this could be placed at the back of the formation to make up the short fall.

In NAW Cavalry units are comprised of 4 bases 45mm wide and 40mm deep.

The footprints of each full strength formation are as follows

The foot prints of the unit fornations are a little bit different between the two rules sets. My solution would be, due to the Lasalle bases being smaller it is posible to place the existing base onto a NAW sized base fixing it temporarily with Bluetac.

In NAW Artillery units are comprised of bases 45mm wide and 40mm deep.

In Lasalle and FOG N Artillery units are comprised of bases 40mm wide by 40mm deep.

Again not much difference but with the Lasalle base being Little smaller frontage it may make a diffrence to the firing zone when a battery is placed in line, so they may be put on a NAW sized base like the cavalry. 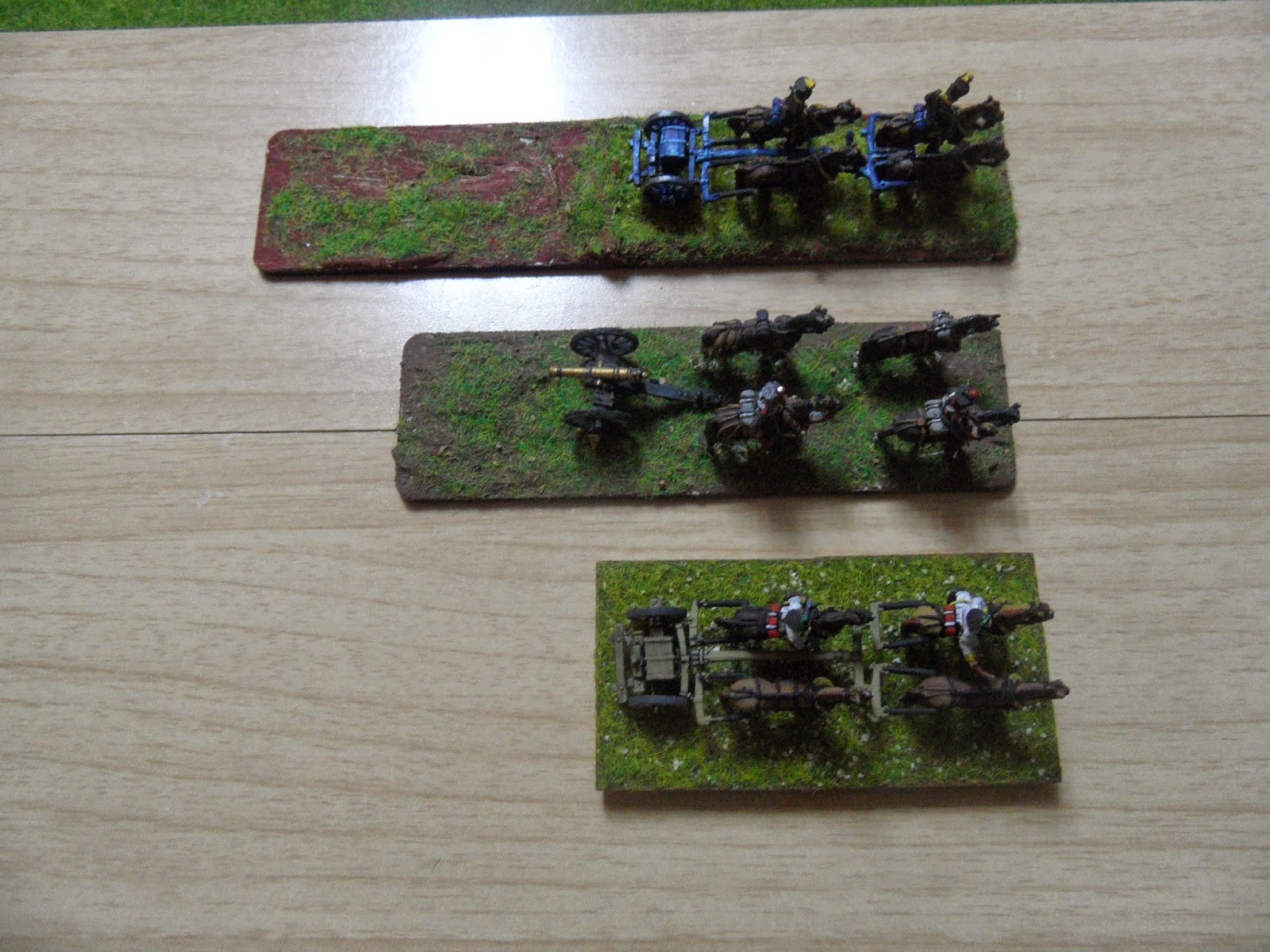 Limbers again are basically markers, but due to combat and target considerations my solution is to add one artillery base to the back of Lasalle sized limber base if it is Foot artillery making it the same length and 2 artillery bases if it is Horse Artillery.
﻿

Skirmishers are basically a marker so the dimensión is unimportant the normal size Lasalle 20mm x 15mm is aceptable (NAW skirmisher base is 30mm by 15mm).


Again these can be placed on NAW sized bases with bluetac as a temporary solution.

One of the main problems with using other size infantry bases is the removing bases as casualties. One of NAWs main game mechanism is that when you lose a base it is removed.The idea for this  there is there are less markers cluttering up the table.

This however  can créate problems in mantainng the correct formation for the unit and when bases are missing for that particular turn,  having to remember that the bases that have been removed are still accounted for, when firing and charging in the same phase or turn.

Also many players spend alot of time and money on their figures, so they would like to see them on the table as long as posible.

Therefore my solution when using other bases, is this;

Use markers to note any base losses, personally I use a piece of cottonwool as a marker (see photo). It is cheap, aesthetic (looks like smoke) can be placed on a base so will be moved when the base is moved. Also it is also useful to note placing the second smoke marker on a unit in attack column that notes that it can only fire 2D6 or 4D6.


If a NAW based army is playing against another rule based army , I suggest both players use smoke markers to avoid confusión.

At the moment I am test playing a NAW based French army agains a Lasalle based Army, will let you know the results next week.

Im sure knowing how Wargamers love collecting figures, that when they decide to collect a new army, after trying out these excellent rules. They will base it permanently for NAW ( I am half way through painting my NAW Prussian army)